We are thrilled to announce that Impact 100 Greater Indianapolis is the recipient of a Spotlight Award from The Women’s Collective Giving Grantmakers Network (WCGN), which recognizes the impact of our $100,000 grant to Rock Steady Boxing (RSB) in 2010.

We were asked to submit information on one of our grants meeting that criteria, and we selected RSB because their grant energized our members and transformed the nonprofit, allowing them to make a direct and long-lasting impact on the communities they reach.

The $100,000 grant enabled RSB to open a boxing gym in 2011 to serve a growing population of clients fighting Parkinson’s disease. With the introduction of Training Camps in 2012, RSB began teaching other fitness organizations their training methods. There are now more than 51 facilities using RSB training methods in 20 states, Australia, and Italy. 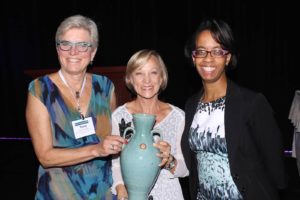 The application for the award contains a great summary of the importance of RSB: “Parkinson’s remains undefeated, but RSB clients attest, and academic institutions such as Cleveland Clinic, University of Indianapolis and Butler University, are reporting and documenting the improved quality of life. RSB boxers may not win titles or trophies, but they are all champions in the Rock Steady Boxing ring.  And Rock Steady Boxing is a champion among nonprofits.”

The WCGN representative who contacted us to let us know we had won thought that the Rock Steady Boxing story was awesome, and everyone who read our nomination felt that RSB deserved to be recognized.

The award will be presented to Impact 100 Greater Indianapolis and Rock Steady Boxing on October 16 during the WCGN Conference in Charlotte, NC. Terry Mumford, Karen Holly, and Beth Thomas will be there to accept.

Winning the Spotlight Award is a great honor and a great story to share with our community. We are delighted and humbled to know that our grants continue to make an impact.