With little doubt, the Impact 100 Annual Dinner that awards grants to our finalists is one of the best nights in philanthropy. June 7, 2016 was no exception, when $155,000 was granted to four local nonprofits.

The big $100,000 winner was Ascent 121 and Lutheran Child and Family Services (LCFS) for their IMPACT grant to help teenage sex trafficking victims. See the grant details here. But there is also a story behind this remarkable grant that is worth sharing.

I remembered that LCFS had been an Impact 100 grant finalist for the last three years, competing for our $100,000 grant. Many would say they were the perennial bridesmaid. Over the last two years, LCFS has been granted $25,500 in non-restricted residual grant funds from Impact 100 for their podium presentations, receiving $4,500 in 2014 and $21,000 in 2015.

But I had to be reminded by Sven Schumacher, CEO of the Foundation for Lutheran Child & Family Services, that the agency had completed a Letter of Intent (LOI) to be considered for an Impact 100 grant nine times. That is the picture of perseverance and dedication to the population they serve. The leaders of LCFS kept modifying and conceptualizing their proposal until our women philanthropists selected them. 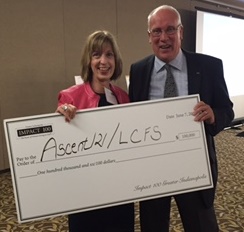 Impact 100 co-founder Donna Oklak and CEO of the Foundation for Lutheran & Family Child Services Sven Schumacher at the Annual Dinner.

“During the years that we have come to know the women of Impact 100, we always found them encouraging and wonderful partners supporting our work in the community,” says Sven. “We kept applying, not always with the same grant proposal, but because we knew we could make a difference together.”

Sven laughed that the grant due-diligence process used by Impact 100 is not an easy one, but he believed that it was the strong partnership between Ascent 121 and LCFS that ultimately made the grant proposal appealing to Impact 100 women philanthropists. Ascent 121 is a five-year-old nonprofit with strong caring therapists, and LCFS is a 130-year-old nonprofit with the facilities and infrastructure to implement the IMPACT grant. Both agencies will use their strengths to serve a growing disadvantaged population—teenage sex trafficking victims.

While many of the details concerning the Awareness Summit funded by the grant are not complete, Impact 100 will likely get top billing as the summit’s funder. More information will be shared as the Awareness Summit brings together social service providers, law enforcement, youth workers, educators, parents, and students later this year.

I have worked with Sven since I began my career in philanthropy in 2000. Over the years I have admired his persistence in making his adopted city a better place. He was raised in Germany, educated at Butler University and became a U.S. citizen just a few years ago. Sven’s training as a social worker is the foundation for his career as a fundraiser at LCFS. Over the years I have also respected his ability to put partnerships together like this grant with LCFS and Ascent 121. For Sven realizes it is not about taking credit for this grant; it is about the lives of the young women and their families that will be changed. Congratulations to LCFS and Ascent 121!